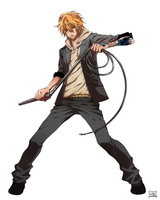 I'm a straight male switch. I like being sub or dom pretty equally, and I'm not going to just roll over and give up!
I like to RP the actions as they happen in the match. Long or short RP, either is okay to me.
I've can be convinced to submit in RP if it's done well. I like the idea more of being a servant than a slave.
I've tried chastity and it's not my thing. I'm cool with making bets over who wins, but I like them to happen when we both still have a chance to win... :P